After putting art on my bulletin board in the hallway, I often have trouble sorting all the pictures when I take them down! The students are required to put their name and class code on the back of all their art, but so many students forget one or the other; if there's no class code, I have to figure out which Lindsay or Payton it is; if they forgot both, the chances of them getting their art back becomes pretty slim!

This week, I tried something different: each 1st grade class had the same art assignment, but on a different color of paper. Then, when I take down my bulletin board, it will be easy to sort them. Also, the students will easily be able to pick out which ones are from their class! Here is this week's bulletin board: 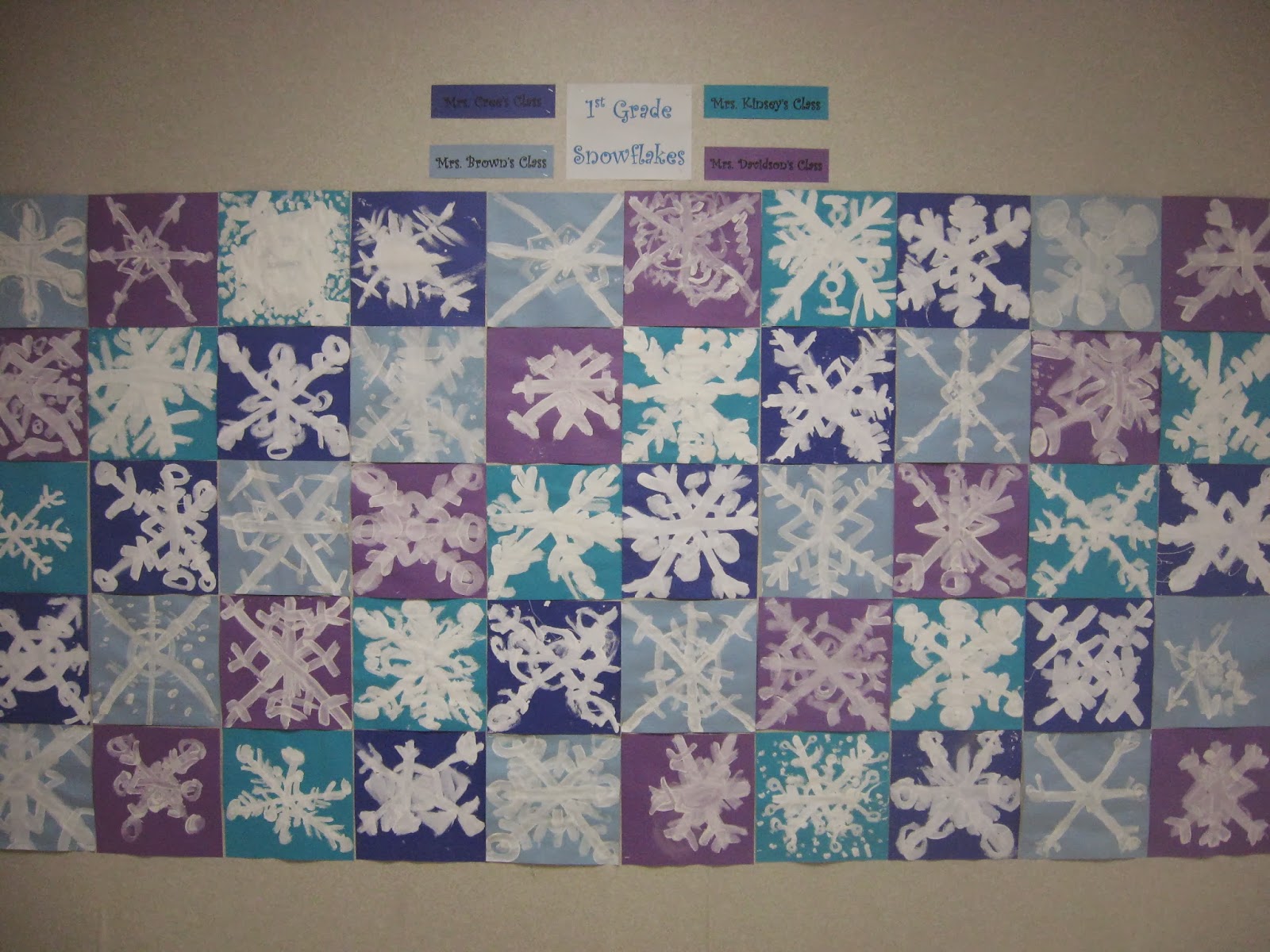 Posted by Jessica Young at 12:25 PM No comments:

Email ThisBlogThis!Share to TwitterShare to FacebookShare to Pinterest
Labels: bulletin board

Starry Night is one of my favorite paintings to teach about! I think I have blogged about it every year since I started teaching; well, here we go again! :)

By the time we got to Starry Night this year, my students were already familiar with Van Gogh because we had already painted sunflowers. I began by talking about many elements and principles of art in the painting. I especially like to point out the contrast of warm-colored stars, moon, and lights in the windows of the buildings against the cool-colored sky and town, cloaked with the blueness of night. There is movement in the sky; it seems to be swirling! The element of line is very strong; everything is composed of brush strokes.

Then, the students got to paint their own version of the sky; I gave them lots of freedom this year, letting them paint it however they wanted. I showed my own example painting, which used dotted lines to emulate Van Gogh's brushstrokes, and I demonstrated on the blackboard how dotted lines can make a shooting star or a brightly shining star. But, after the demonstrations and ideas, they could paint in any way they wanted.

The second day, I began by giving each student a postcard of either a Van Gogh painting, or a Vermeer. I explained the stylistic differences, and had the students figure out who painted the picture they were given. Then, each student went up to the blackboard and attached their postcard with a magnet to either the Van Gogh side or the Vermeer side. Then we further discussed differences between the two artists that the students noticed as they saw the many postcards. After the postcard game, the students finished painting their sky.

The last day was for making the town. I had the students cut buildings and trees out of black construction paper. I know this doesn't quite match Van Gogh's town, but I like the effect of the black town silhouetted against a lively sky. I demonstrated many ways to make trees and houses, and fancy buildings. It is much easier to cut a square, triangle, and rectangle, than trying to cut out the shape of a house with a roof and chimney all at once.

Here are some finished results, as well as the bulletin board showing many of the paintings all together. 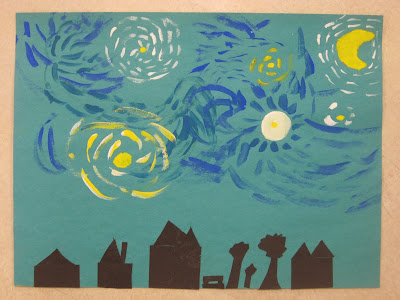 Look; it's the big dipper! 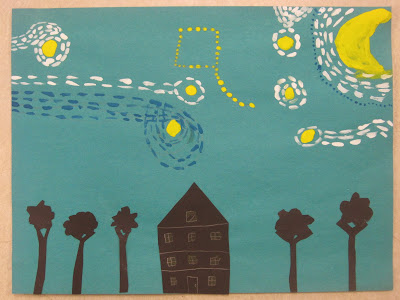 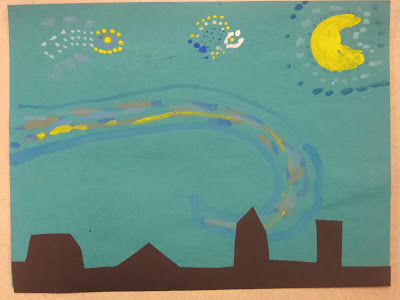 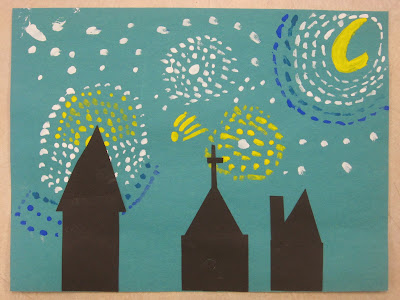 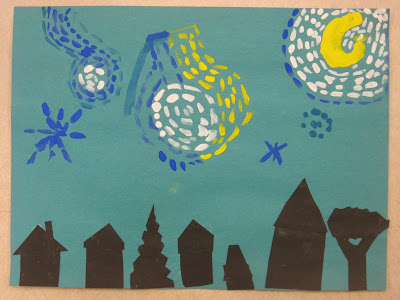 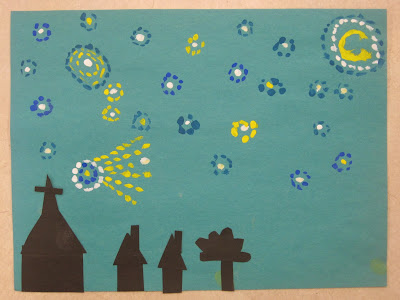 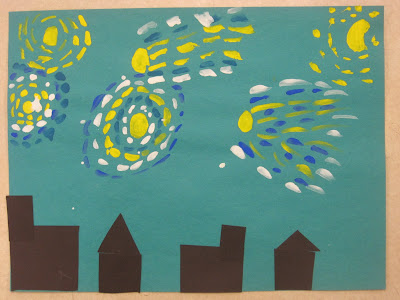 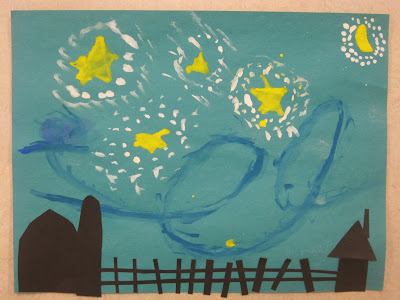 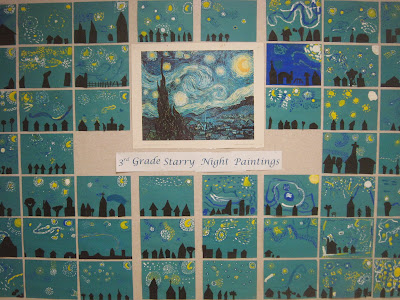 Posted by Jessica Young at 1:33 PM No comments:

Jessica Young
I teach art at Carroll Elementary School in Flora, IN. My favorite art medium to work in is ceramics, but I also enjoy painting, drawing, and printmaking. While I enjoy creating art on my own, it is even more rewarding to share my love for art with my wonderful students. Their eagerness, willingness to learn, and talent make teaching a joy. I am a member of the Reformed Presbyterian Church of Lafayette. I have many close friends at church who support me and encourage me as I try to live for Christ.